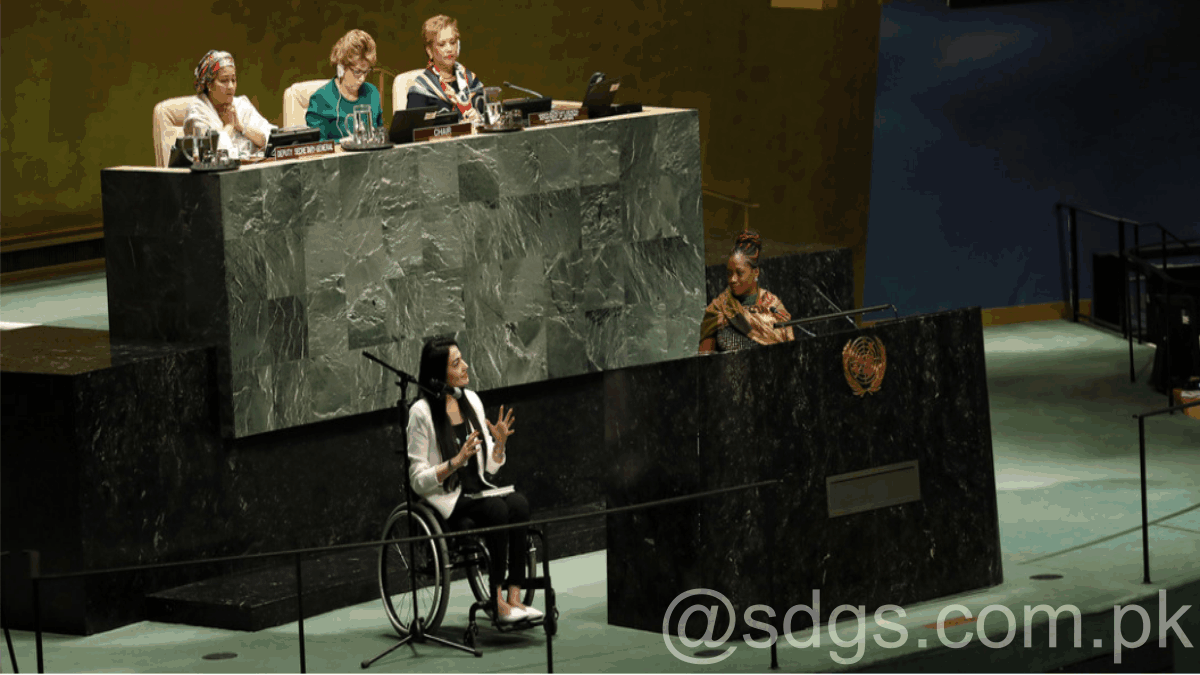 Muniba Mazari and Mary Fatiya, addressed to the 63rd session of the United Nations Commission on the Status of Women (CSW) in a joint speech, called for basic social protections to be extended to women and girls throughout the world, according to the needs, and line with its inalienable human rights.

“Being a woman has its challenges. Being in a wheelchair is the icing on the cake, “she told several thousand activists, diplomats and academics gathered at the UN General Assembly Hall, Ms. Mazari, who is also a UN Goodwill Ambassador in Pakistan. .

Ms. Fatiya, who described going long distances to a school where there were only two bathrooms for approximately 600 children, said her ideal world was centered on a life of peace, access to medical care and good infrastructure: “I’m not asking for a Luxurious way “. . I just need it and I have the right to have it. “

The annual meeting of the Commission, which dates back to 1947, will gather more than 9,000 representatives of civil society organizations at the United Nations over the next two weeks. This year’s theme is “social protection systems, access to public services and sustainable infrastructure for gender equality and the empowerment of all women and girls.” It is expected that many of the marathon discussions will also focus on gender equality and the 2030 Agenda for Sustainable Development. .

“Because that is the crux of the matter. Gender equality is, fundamentally, a question of power, “he said, noting that the world had been lost, highlighting a rejection of women’s rights.

Mr. Guterres, who called himself a “proud feminist,” said that changing power relations, overcoming gaps and prejudices and fighting to preserve profits requires involving women as equal participants in society.

“we all pay the price. When we include women, everyone wins, “he said.

Similarly, this year’s Chair of the Commission, Ambassador Geraldine Byrne Nason of Ireland, said in her speech that “resilience is in the DNA of women and that the world needs the resilience of women now more than ever “

The topics that will be covered during the next two weeks, range from urban space planning and public transport, taking into account the safety and mobility of women, to improve the access of rural women to qualified midwives.

Invest in ‘free time’, opportunity, for women and girls
The President of (ECOSOC), Inga Rhonda King, also highlighted, for example, the importance of public services, infrastructure, and social protection to recognize and value unpaid care and domestic work, which often It falls on women and girls in the family.

The director of UN Women, Phumzile Mlambo-Ngcuka, highlighted some of the progress made in recent decades and said that thanks to investment in infrastructure and access to public services, there are now more girls in school than ever.

However, he pointed out the need to close the gaps and said that 71% of the world’s population still does not have full access to universal social protections.

Ms. Mlambo-Ngcuka urged greater leadership on issues related to women and said that women and girls have a vital role to play in shaping the service and infrastructure policies that affect their lives.

Among the speakers of the inaugural day, was Marlène Schiappa, Minister of State for Gender Equality of France, the nation that held the presidency of the Security Council this month. She said that the participation of more women in political and peace processes was vital for the empowerment of women and a problem that affects the diplomatic community. She urged the Security Council to redouble its efforts to include more women in these discussions.

Meanwhile, on Monday morning, in the Security Council itself, where Afghanistan was a priority, Storai Tapesh, Deputy Executive Director of the Afghan Women’s Network organization, expressed concern about the move towards a peace agreement. with the Taliban extremists.

“We, the women of Afghanistan, have cautious optimism for peace. However, we are concerned, more than ever, that the rights.